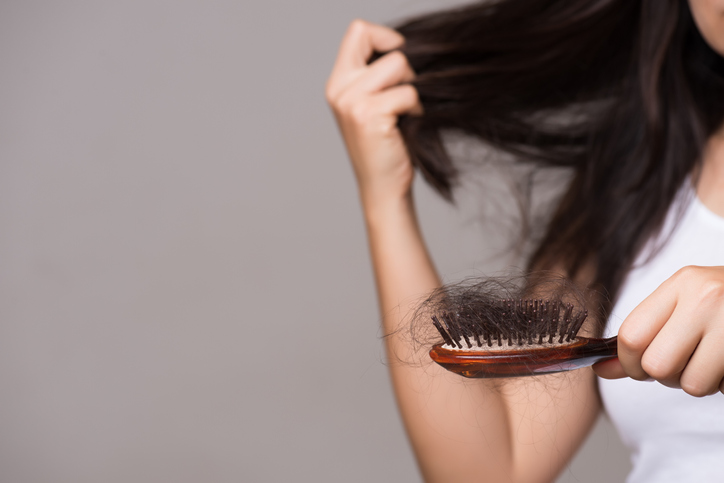 The ordinary kind of hair loss, called hereditary hair loss, can affect both men and women, but women are usually affected less than men. The condition is so common that it nearly can be regarded as a part of the normal aging process.

The pattern of hair loss and baldness are different for men and women. On men special areas on the head begin get totally bald. These areas are usually at both sides of the front, and the top back side of the head. The hair loss then progresses with these areas extending, and at last most of the head can be totally without hair. However, a great area in the neck uses to remain unaffected and keeps a thick hair cover. The same is usually true about the area in front of each ear.

On women all the hair on the head begins thinning, and then gradually progress over the whole head for many years. Women seldom get totally bald areas on their head, but the hair often gets so thin that the scalp is clearly visible through the hair.

THE CAUSES OF HAIR LOSS

The skin has there layers: The outer layer, called epidermis, consists of epithelial cells. Under this lies the dermis consisting of connective tissue. At the bottom there is a layer called the hypodermis consisting mostly of fat cells.

The skin has narrow pores, hair follicles, extending from the surface down to the top of the sub-dermis, called hair follicles. A hair extend from a growth zone in the bottom of each hair follicle and out at the skin surface

By the common form of hair loss, a substance in the body, dihydroxy-testosterone (DHT), gives a signal to the cells in the hair follicles that make these cells divide less so that the production of hair slows or stops.

DHT is a metabolic product from testosterone, the male sex hormone. Also women have some amount of testosterone and DHT in their body, and therefore hair loss also affects women.

Only cells that are susceptible to the influence from DHT will slow the growth process. This susceptibility is inherited from the parents by some individuals, and not by other. Follicle cells in the lower parts of the head are usually also resistant against the influence from DHT, and therefore these areas seldom get bald.

The effectiveness of hair growth will not only be affected by DHT. Other substances found in the tissue may give the cells signals to divide more, and nutrients like vitamins, minerals and essential fatty acids may make the growth process more effective. Some substances in the tissue may also block the DHT or ease the removal of this substance. Therefore all individuals susceptible to the influence of DHT will not lose hair in the same extent.

Having a good diet giving the body vitamins, minerals and anti-oxidants in the right amount may slow down the speed of hair loss.

There exist pharmacological products on the market that can help against hair loss, but usually not 100% effectively. Medicines used to treat prostate hypertrophy also have been proven to stop hair loss and to get hair to regain, because these drugs block the substance DHT. Propecia is a prescription bound drug to take by mouth based on an original prostate medicine.

Rogain is a topical drug to apply 2-3 times each day that does not block the DHT, but stimulates the hair follicles cells to proliferate better.

There are many natural products on the market to help against hair loss. These products often contain several substances working together by different principles.

They may contain vitamins or minerals that are necessary for hair growth. Other substances give signals to the hair follicles to increase hair growth, for example procyanidin B2. Some ingredients work as anti-oxidants that inhibit oxidative attack on the follicle cells, like L-arginine.

Some natural products also contain substances to block DHT. Saw palmetto extract contains substances acting as DHT blockers by much of the same mechanism as prostate medicines.
Still other ingredients can reduce the conversion of testosterone to DHT. Grean tea extract have shown itself to contain substances with this effect.

Surgery is an effective treatment against baldness in limited areas. By surgery hair follicles from parts of the scull immune to DHT are moved to bold areas. The hair in the treated areas will however not get as tight as naturally growing hair.

It is also possible to implant artificial hair into the scalp. By this method, large bald areas can be covered, but the treatment implies a certain danger for infection, requires good hair hygiene afterwards and requires a regular refill to replace lost hairs.